Obama, Wen Visits and its interpretation from Indo-Pak Perspective (The Dragon, Eagle visit to Elephants)

December 18, 2010
The Dragon, Eagle visit to Elephants
Wen-Obama-Singh
Barrack Obama & Wen Xiabao Visits and its interpretation from Indo-Pak Perspective!
Note: During the last quarter of 2010, the Heads of Government of all the P-5 (Permanent Five in UN Security Council) will have visited India. 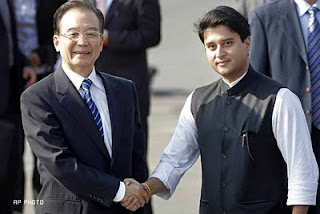 In this post-Wen visit and related developed story of OBAMA WEN Visit to Singh (Mr. PM of India), interpretation of new world order pertaining to Asian role is becoming more coherent to undress the ugly face of world leaders objectives.
Threads of wikileaks unveiled secrets, Chinas stand on unavoidable issues with neighboring countries and Pakistan's concern over the neglect of US and favor of China over the Indo-Pak relationship is clearly emboldens the mole of Indo-China miscreant plot against India... by tie-ups with Bangladesh, Sri-lanka's and support to Myanmar, China is gripping strong to against India to remain to superpower of Asia and eye world's supreme seat.
Since the history known to man China & India do exist  in their own fashion, I Guess Himalaya is just made to let the world no that these two greatest civilization of the world will neve come closer to each other despite of many fold increase in the need of each other. It is not amazing that because two neighbors are not joining hands many far anonymous took the advantage of it.  Europe and Now America have evolved on the world centre stage despite the fact that many early discoveries and civilized behaviors were been developed by these to historic civilizations…
This ever widening Vally between Elephant & Dragon is a partial illusion and partial reality, in his statement Mr. Wen have clarified "Both the nations have lot space in the world" and both can mutually excel in economic paradigm but none of the corners from both the nations have inqalabed the political support for India on UNSC permanent support neither both the parties have discussed about the border dispute and China's avegenging support to Pakistan on POK & COK.
Vibrations of Dragon can be interpreted as these successors of Confucius are in no mood to bestow faith on any other nations of the world. This behemoth architect of Mao TseTung is so much communistic that they are not at considering that armor has been secondary tool for India since history known for any kind advancement in world center stage.
On the other hand 'Temple of Capitalism' and 'foundation brick of Racial impartiality' had sent their delegates to find out the possibilities of Trade & Commerce between Eagles & Elephants. They outspokenly commented that a country where millions sleep hungry on streets are 'not emerging but emerged'. focused on profit they did what Chinese can never do to Indian "Praising". They got the nerve all India wants is 'Praise' even if Elephant sneezes and Eagles claps we are enthralled. I guess a psychologist can better comprehensibly comment on this factor of 'Macro impact of individuals personality trait in a group of same PT' as every Indian just seeks applauds that what made Mr. Wen errantry over the media comments on his visits agenda's. 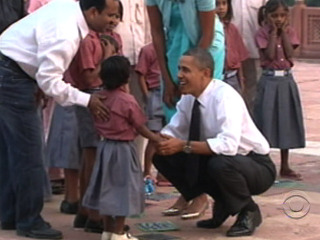 We painted and pictured entire gallery by "Obama this, Obama that.... Obama here" but cared a damn on Mr. Wen's visits reason (It was based in India's stance on Mobile imports from China due to ill-minded objectives of Chinese spying diplomats).
It is notably observed that for the first time USA chief did not proceeded to Pakistan after India.... and for the first time Chinese Chief did it. Pissed Pakistani diplomats did not hesitated to use sour tongs on UNSC stance of USA what more India never tired of childish attitude of "Kashmir bite to India & Pak".
When will we be able to Understand India is on the stake of Fire not because of foreign player but because of Indians failures: Wake of Guys!!!!!!!!!