Global Power Is Shifting The Locus

February 04, 2011
“Post recession came the might of whistle blowers both have jointly hooked off the eagle behind the bars”
“If Dragon can showcase harmony then believe us elephant can dance too!”

Egyptian outbreak has clearly professed that no one can dictate educated human being. Democracy is always the solution for the anarchy of monarch. Everyone knows why world-war-two started? It is because those who lost the world-War-1st had been so badly scuffed to death by the victor nations. They slowly regained power and bounced back for the revenge! Dictators too will have the same end. Earlier majority of the stupid common man was illiterate or poorly educated. For them reading books or gaining knowledge was least important then arranging bread and butter for their family but today people are educated and are secured with the shelter, food and social status. They are self-disciplined; they are aware and awake to understand the injustice and indiscrimination. All these young educated and contented blood required is a nudge from the whistle blowers.
IT revolution has revolutionized the way stupid common man interacts. E-mails and Social networking websites are now reached above then flowery, valentines, Christmas or DIWALI well-wishing notions. Now a stupid common man does not only send e-wedding cards via social networking sites. They are sharing and showing the picture of world class talent. They are talking about the people dying of hunger and riots. They are expressing their concerns over the idiotic naked dance of political leaders. This is a revolution which has just shown up a little in Egyptian sub continent. Folks! There is a lot beneath the cleavage of our young brethren… you just wait and watch to see it.
Wikileaks.com has not only exploded the web space by the ugly truth of a cheater called USA. It has also warned that every nation’s political leaders are actually a puppet of Uncle Sam. Second War on Iraq was the first nail on the coffin of eagle. Turmoil of Afghanistan, fire play with Pakistan, blind ‘eye-scarf’ game plot with Israel is just a beginning of ‘eagle’s total shoot out plan’.
Fall of Berlin wall befallen the Russian influence, this does not stopped another communistic giant ‘Chinese republic’ to prosper and develop. With the cohesive vision, patriotic sentiment and composite efforts towards education and production Dragon took over the economic leadership of not only Asia but of the whole world. The more we narrate the success story of China INC the less we will do justice in defining their effort. China perfectly solved the equations of new world order and so redrafted their foreign policy incisively and decisively.
India too opened the economy to spare away from the interim crisis but this time we have done it well in time. Our IT industry took the saddle and noosed us to drive us far ahead in the forte of developing logic and platform for the world’s behemoth corporations. Too late but too much in time our third generation have got the opportunity to see the world from a very respectful perspective. In last decade every nations of the world have not only realized but admitted that now Indian are not only coming for the blue collars jobs but they are now having capability to administer the giant systems of the world. Lovely are my young brethren that they are not only doing their jobs but also understanding the matrix of this new world order. The speed at which we are growing, it is letting others believe that we will surpass them within a decade or two. This is why they are buying our politicians so that they can keep our parliament hung and junked. This is why they are sparking bloody revenge taking attitude among our brothers in the forest of eastern India so that they can keep us in tussle. That is why they are duping our neighboring countries to never develop harmonious relationship with us so that we cannot decide on mutual walk on the growth path of Asia. Folks! Elephant have demonstrated her capability not it is the time for Dragon to believe that we together can establish peace and harmony in this boundary less global village. 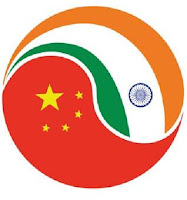 Pals if Dragon will sing then elephant will dance to bring the whole world live happy ever after in the village called ‘The Globe’ Hopefully ‘Jai-Hind!’