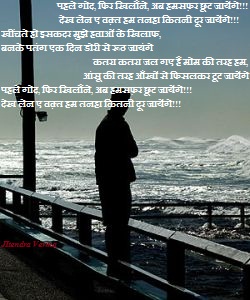 पहले गोद, फिर खिलौने, अब हमसफ़र छूट जायेंगे!!!
देख लेन ए वक़्त हम तनहा कितनी दूर जायेंगे!!!
खींचते हो इसकदर मुझे हवाओं के खिलाफ,
बनके पतंग एक दिन डोरी से रूठ जायंगे
कतरा कतरा जल गए है मोम की तरह हम तुम,
आंसू की तरह आँखों से फिसलकर टूट जायेंगे
पहले गोद, फिर खिलौने, अब हमसफ़र छूट जायेंगे!!!
देख लेन ए वक़्त हम तनहा कितनी दूर जायेंगे!!!
Sailing alone... walking alone... talking alone
like stars.. among a lot I am alone!
yesterday I was sitting alone on the roof till deep night.... staring to the stars for as long as my eyes refused to flung open. Stars twinkled for two reasons... first is a normal science i.e. scattering effect of air particles and second was the moistures in my eyes.
My imagination zoomed many folds deeper into that space and beneath the plane surfaces of many planets that may be revolving around those stars appearing like white dots in the black canvas. alone among so many... I can see stray dogs running behind the coming and going vehicles as if that engine sound is scorching their irritation. A drunk man is yelling upon an electric pole because that pole came in the way of his home. Night was on its verge of darkness and no one except the night itself was happy. I re-zoomed my focus to the sky. those white dots in dark canvas helped me to connect them from one to other.... stars turned happy because they were about to meet with each other at least in my imagination and I too smiled because i was designing the best sketch i had ever thought of. i.e. sketch of happiness, of smiling lips of those who weaved many laughters to my lips.

Memories.... of good days makes us cry and of bad days remind us the bravery we had shown off! but loneliness has two tragic effects...  if it is demanded it is painful, if it is supplied it is severely painful. yesterday it was partially supplied and partially demanded and the mixed effect of that pain sliced my cardiac tissues into pieces.
On top of every such feelings which has attacked me repeatedly since I started feeling senses at heart.... I got to notice one thing! i.e. after every catastrophic jolt comes utter peace and silence....
Yesterday night like a tsunami passed by... Today it seems I am summoned to the god of death for the calculations of sins... No one is talking, no sound... no screams:::: A silence of eternal voyage! Feel of of death is too lovely!!!!
अभी आया हु, अभी जाना है| कई वादे और है जो निभाना है|
इस जिंदगी का इतना फ़साना है, मौते से पहले मैय्यत को सजाना है!
Amen!!!