Snnipet from My Book : My Wise Countrymen 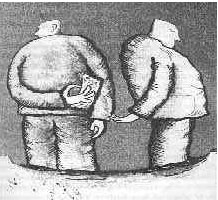 Rahul Patil said…
Awesome Sir......!!! this creates interest while reading and this one is GREAT :-
“A friend says: A cigarette reduces five minutes of life!!!
Another friend says...
Buddy whenever I will be left with five minutes of life
just help me fetch a cigarette.....! Who hell will wait so long! ”
kEEP GOING, BEST WISHES!!!
May 4, 2011 at 3:07 PM