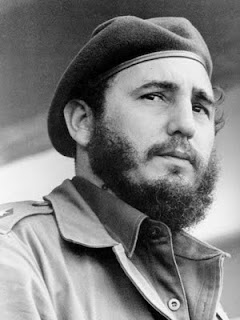 आज कल मेरा संवाद एक महान हस्ती से स्थापित है, मैंने जब से दुनिया के नक्से को समझ पाने की दशा पायी है, तबसे ही लातिन अमरीका से मै प्रभावित था! क्यों? वैश्वीकरण के प्रति द्वन्द के महान योध्या श्री फिदेल कास्त्रो से मेरा परिचय लिखता हु, आपकी भाषा में आपको जवाब मिल जायेगा!!!
Cuba! A country far small than India but far-far ahead then Indians... is one of very few communistic countries of the world! Ever since, I got to know that Mr. Nehru adopted partial social and partial capitalistic structure of our Indian Economy, I developed a sense of disagreement with him. My parents, many of my teachers and other social bonds have seeded negativism for Mr. Nehru in my mind. 'Discovery of India' was my first conversation with him, I began to love him well within a very few pages of his thoughts! May be he was a womaniser but that is none of my business! And I guess it should not be yours too! My chatting with Mr. Narayan Murthy in his book 'Inspiring India of Tomorrow' He told about his experience with France (another communist country). Mr. Murthy said "Though France and India are friend but, I must say the solution of India is capitalism... mega-corporations for millions of jobs with sufficient disposable income for Indian youngsters is the solution of Naxalits, Terrorism and Extremism in India" I am partially agree with Mr. Murthy! Even Mr. Amratya Sen, via his book "The Argumentative Indians" he explained me that how good we Indians are while claiming our supremacy since the history known! But sadly we will not have such a smooth future for long! In one of the greatest conversation with Dr. Arindam Chaudhary via his book 'The Great Indian Dreams' I got to understand the concept of soft Capitalism and LSP (life style parity). I salute Dr. Chaudhary for his words on Darwin’s Theory as an applicable truth for the world’s economy. But Mr Fidel, I must give you my standing tribute for opening my eyes.
Though everyone tried to explain me about India but no one have done it much better than Mr. Fidel Kastro of Cuba. He is a Spaniel, he fought for Cuba and he crowned over Cuba with the highest blessings and love of his countrymen. He once addressed to his own students in his own country when he said "Poor Indians don't know how million times better they are than the Kohinoor but sadly they are just willing to be studded on the crown of Queen of Britain" or this time on foot wear of president of USA!!!
Our crude oil imports is monitored and controlled by USA, our nuclear deal is directly under vigilance of USA... Our IT industry is governed by USA. IIT & IIMS are in the mercy of USA. Our education industry (yes industry) is like a poor milkman. 3 o clock in the morning he began to feed the cattle, 5 AM he milks it and 6 AM the very first cream of the milk, he is forced sell off to the kingpin of town, skimmed milk he sells to rest of the village and unsold milk he caters to his son and daughter (I doubt if caters to daughter). From across the globe! (Of which USA is the kingpin) they buy the best of the lot! Sadly exceptions like Bablu Shrivastavs are left in Indian jails to rotten until alive.
In a recent study, IBM is becoming the single largest optical fibre network for India! I.e. if ever India dares to war with USA... all US has to do is to unplug India from IBM network! In another study, CEO of Airbus (the second largest airborne maker of the world) met with Indian Prime Minister to provoke Indian Farmer for cultivating 'Jatropha (Bio-Diesel)' so that India can furnish 30% of the global Aviation demand!!! Friends... a country which alone can feed 7 billion human of the globe is going to cultivate fuel! In exchange of it, poor farmers will buy grains.... i.e. considering the future demand and supply of Food and Fuel! It will be equated to sand vs. diamond deal!
India & China are world’s largest Car market! Good news? Car sale in India and China has converted 16% of fertile land into roads, malls & parking lots! Gentleman, what will our kids will eat tomorrow??? Green revolution is the need of the hour but my dear dictator supremo of world’s largest democratic country... where the hell is your 'Look East Policy'??? I heard, UPA2 is planning for another green revolution in eastern seven sister states? Oh might be your step-father China would have scolded you for doing so and that is why you are hospitalized in USA! Alas!
My dear Fidel, You are brave.... your small country, nearest to mighty USA, is determined to bring back the socialism and love for human being! My countrymen are used to of being slave. I am sorry; we can react to your comment!
Folks! I know, I am a lay man... I know I am just a stupid teacher in a merchant’s villa but I am having a concern! For yours and mines kids, please!! Beg me a revolution... I know the ways but I cannot walk alone.... I am ready, indeed my father is ready to sacrifice me... मगर दोस्तों, मैं सरल हूँ पर सस्ता नहीं हूँ! जय हिंद!