August 22, 2011
Slightly Not Agree with Civil Society
I may sound Anti-Indian though the fact is I do not want that CJI and PM to come under Jan Lokpal by keeping the existing governance system of democracy. If it is so necessary that Jan Lokpal should have the supreme command over the validity or invalidity of the central government's deeds then the word 'Democracy' must be deleted from the Indian Constitution. Please don't offend me of being against Anna but the thing is Democracy means by, for and of the people and if Lokpal gets elected via anything other then general election to hold the supreme command of alarming miss deeds of government than I guess, we will compromise with the attribute of democracy. Though I will readily accept the lokpal bill as drafted by Civil Society and will not at all give a damn to what UPA have vomited on papers.
Autocracy is better than Democracy
Though, It is also true that I am not convinced with Democracy as well. I read how Ashoka, Akbar, Aurangjeb, Alexander and Maut-tse-Tung ruled their Empire. To be a bit mythological, how Ram and Krishana had ruled their Empire... to become even more relevant, I must call here the way Indira Gandhi ruled the India. The beauty of effective politics lies in autocracy only because the minimum this facilitates is in-time reaction to any event. Ram and Ashoka are known for their pro-people governance.  Aurangjeb made India, worlds richest economy for the first time in world history in 1755AD. Mau-Tse-Tung made China what China is today. Indira-Gandhi gifted Nuclear Power to India. Well my point is... we must lay the foundation of a method by which a country lover holds the crown of the country and then avail him all the autonomy to write the fate of that country. Indian will take a year or perhaps less to learn all that requires to make mother India feel proud of this country like self-discipline and civil codes etc. Democracy is forcing us the bow down for every Horse, As and Mule and so we are not able to force plan anything in against or favor of many crucial needs of this seventh largest 30 thousand years old Empire called INDIA! 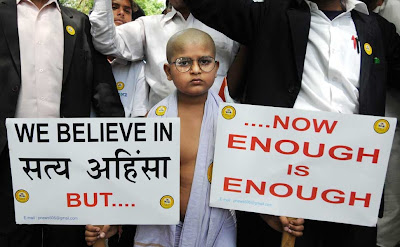 Dissolving Indian Democracy will no do
But dissolving Democracy of India will not bare any good fruit either. Because once tasted blood, lions never return to dead flesh. yes! Indians are lions but are so far enslaved by a few circus jokers. This is for the first time since we got freedom we are positively revolting against the dirtiest deeds of our politicians. Sitting ducks are stretching their wings to realize the lion within them and this is the long awaited beginning. Jan Lokpal should not include Prime Minister of India but should include everyone serving within PMO office. Except Chief Justice of India, Lokpal must have rights to inquire and dismiss everyone below him. This will anyway provide sufficient shield to drive away corruption and will not violate the definition of democracy as well.
Actually we are rotten
Actually since we began, we have changed a lot. Unlike our ancestors we are no longer strong and determined, without any technology at all they used to travel from Europe to Bangkok on the back of horse and were capable to wage war too. Maratha king Rana-Sanga had the sword so heavy that four men of present days put together can not lift it a inch. Even if we travel from Delhi to Mumbai in luxuries of air plane, we throw our body in hotel bed for being exhausted off! Because of this technological luxury, we are now turned into a fugg of rotten flesh and smelling blood and so are liable to be condemned and looted.
Europe, America & Asia
Till before 1326AD, Europe was as bad as any other part of the world but after the success of post dark age revolution they learnt to innovate and traverse with the time. They brought machines and made their life aristocratic and disciplined. They developed the royal code of conducts and trained themselves for which we are called human. This discipline brought them the courage to go beyond their limitation and explore opportunities beyond the sea shores. During the decades 1780AD, they strategically developed America, Southern Africa and Australia their new home to dilute their domestic mushrooming population and enslaved them with ever astonishing brutal deeds. Today, Europe has all a man desires. They designed paradise on earth, North-America become their rook to shepherd Asia, South America and Africa. Asia become the land of opportunities. Europeans treat Asia as same as Alexander used to treat it i.e. loot everything with the help of Asians only.
Since Persian age till Islamic sultans, Middle East remain divided in Pro-Europe Sultans and Anti-Europe Citizens. China never reacted to any events took place in Thar, Indus and Dravidian Civilizations and same it did during Indo-Pak, US-Afgan, US-Iraq events.
Jan Lokpal is Indeed very very Important
With Anna Hazare's revolution and with all my best wishes for its success, I want to request with Indians that now if you have began then please don't stop until dawn breaks. I have many reason to request this. First is, this century is of Asia and if we Indian wants any prominent role to play in the fate of this new world order than we have to overcome with this domestic inferiority as soon as possible. Second is, by being one-sixth of worlds total population, we should just not tolerate the injustice of a few traitors so that we can be more responsible and sensible towards the humanity graced to us by almighty. Third, India is the only hope for poor Africans and many such poor countries and if we only remain in the mud of corruption at this stage where pain cry is piercing the ears, it will be too late to get back our glory of world leadership we lost 5000 years ago!
With You Anna, Jai Hind!

amit.patidar said…
very nice and pure thought..by true indian....in lokpal we can add something also like we can increase power of our main leader(rastrapati).....
August 22, 2011 at 4:30 PM