Dr. Sam Pitroda (Adviser to PM of India) inspired me highly by his statement "India has the resources of 20th Century, Mindset of 19th Century and Challenges of 21st Century!". But I wonder why a system which understands the core problem of India is not serious about addressing the very need of the Time?

Rs.32 in urban and Rs.26 in rural India deemed fit to survive a human life? Even if it translates to Rs.4800/Rs.3800-U/R for a month to a household of 5 adults as per the clarification given by the Montek Singh Ahluvalia, it still a big blow in the respect frame 44% Indians who on papers are termed as 'NOT POOR' 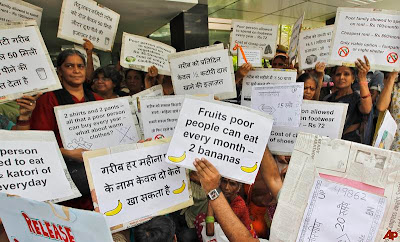 Considering the fact that majority of slum dwellers waste 2 hours in early morning to arrange water for lively hood and 15% of their hard earnings in the health issues caused by the poor drainage and muddy pathways. In economic terms it is a loss of Rs.941/-. This means their usable earning is now  Rs.3859/-. Poor dual standard education cause them poor sense of home management i.e. consuming worst class alcohol daily, not allowing kids to go school, violence with spouse and debts for dowry/medical/social ritual needs are forcing them to waste their hard earnings gets evaporated without any effective use of it.

Yes! as per planning commission of India, one can survive with Rs.32 per adult a day but nothing better than the lives of an animal or a zoo species. This theory is not answering the impact of Inflation on poverty. What if a quality staple food and mandatory need of patrol usage billing them big hole in pocket?

Post 1991, FTA's and free-economic boundaries added beautiful lights and shining roads in Indian cities. Middle Class Indians are now wearing respectable suits and tie but they are now forced victims of Banking systems. 47% Indians are now middle class (on paper) and 90% of them are having some or the other kind of loans (Marriage/education/personal/car/home). They are badly tied up with their jobs and its related exploitation. Poor's and Middle class Indians have no time to protest against the corruption and anarchy of Indian Democracy. Upper-Middle Class and Upper Class Indians are not able to Identify that their is a need of revolt against anarchy because of heavy disposable income resting in their savings accounts. 76% of Indians are tied up with some or the other sort of Mutual Fund, Share/Commodity markets... their EPF, Savings, Assets are incisively utilized by the corporate giants with the help of Banking Institutions. 34% of Indians do not pay taxes and majority if pay do not pay the actual amounts! Taxes are not sufficient, sizable amount of money is parked in foreign banks. This all results into the big failure of Indian Planning commission.

Kapils Sibbal's incisive move of opening up maximum possible Educational Institutions has degraded the quality of education standards. Today 47% of Indian Private institutes are run by the capitalists with a single objective of managing unaccounted funds and so they are least bothered about what kind game is on with poor kid students of India.

Educational courseware of Schools and colleges are either influenced by the political motives or by the foreign policy makers. Those kids who are fortunate enough to get education are getting the rotten garbage of a weird extremists. Thanks to our Foreign friends like Russia, USA and UK who are able to see their personal motives in Indian subcontinents and hence are playing double game with us. If in congress we go by the law of dynastic hair-apparent law than the son of Sanjay Gandhi & Menika Gandhi should be the successor but because Sonia Gandhi being the daughter of a KGB(Russian Spy Agency) spy can give unprecedented millage in controlling India and thereby Asia, the world power forced Indian politicians to choose Sonia in spite of Meneka and Rahul over Varun. Ah! Sonia is doing the best job for her bosses their in Europe... that why she has been listed in the Forbes most powerful women in the world many a times.

Folks! I can smell the biggest conspiracy as the biggest danger on us!! This is the second but last chance for we Indians to triumph and win the saddle of world! Please-Please-Please wake up!!! Jai Hind!!!!