Understand where are we going? What will happen to us? Why do we need to think, plan and execute right now?

"Shouting slogans against corruption, Mourning on Shaheed Diwas, Fasting at Jantar Mantar, Putting Gandhi Top on head depicting I am Anna will not do..."


People criticized 'Indian Planning Commission' for their manipulation of data about the poverty scale of Indian population. Many have commented that UPA influenced the data. Even I was in impression that politics is creating the illusion but somewhere within me, I was grasping the fact that this just cannot be the only political stunt and when I read Mr. D Subba Rao's statement in Time of India today morning, I realized that my doubt had some voice. Including Dr. Rao and me, readers must not misunderstand us as a supporter of existing government. As Mr. Montek Singh Ahulwalia rightly pointed that 'whoever comes on chair... poverty in India is on its way to reduce and it has nothing much to do with politicians'

Let me put you on the statistics

This fact, as per D Subba Rao, is calculated with passimistic approach as during 2009 India faced Drought in many states. If Indian research agencies can table the data of 2011, this figure will be further cheerful as monsoon was perfect in 2011.

He further explains that one should not rub eyes on media tubes to believe what they say... they misrepresent the data as
Media asks how planning commission can conclude Rs.22 & Rs.28 per day is sufficient to live for a person? when a liter of milk costs Rs.37 and a dosen of Banana costs Rs.60?

I strongly do believe that Government of India is not responsible for the poverty in India Directly!!
It is the mentality of Indian which is demonstrably plays havoc on Indian underprivileged population. A rickshawwala in Delhi earns roughly 300-400 Rupees a day (this is quite often larger than the earnings of many IT peasants of the same city) but he buys Drugs, Brown Sugar or such things everyday! for meals he is happy to beg in front of any Gurudwara or Mosque or Temple... There are many examples, dwellers living in horrible jhhuggies in cities are capable enough to have decent house but they dont... In states like Chh'grh and MP where government is selling Rice and Wheat at Rs. 2 & 3 a Kilo... government better knows that this food grain are stocked by the local merchants and later sol in the free markets. Quite unsurprising that the very ration card holder sells his share of grains to local market and makes money form it. Entire PDS system is used up by goons and mafias.

To further disappoint you, I have another very good sad news!!

Indian family structure is practicing 'Hum do Humare do...' well happy? you should not! lets talk statistically once again... 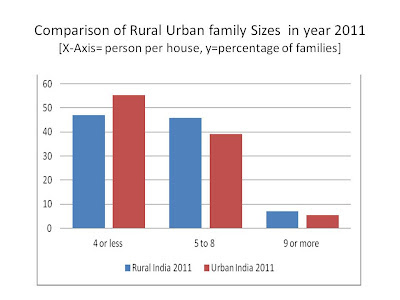 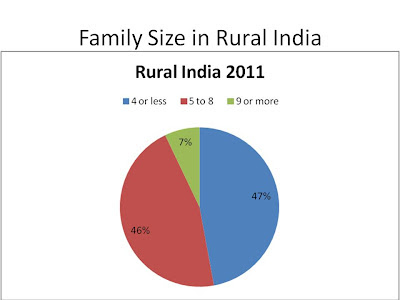 In Urban India 55.5% family have less than 2 children, 39.1% of families have less than 8 children & 5.5.%  have more that 9 children. In Rural India statistics goes 47.1%, 45.8% and 7.1% respectively. Now look again, 7.1% of rural population having more than six children in family... Do you think this household is capable of effective education? Out 0f 72% population living in rural India 52.9% households are having more than four children in home! These households barely have good economic health. Forget about the awareness about the need of quality education! They are simply not capable of having education of global quality... Imagine! what will be the future of India?

52.95 rural families are not educated, are bigger families of India do not give a damn to education... want their kids to migrate into bigger cities of India to earn livelihood. Uneducated energetic young Indian in city where their is no jobs! what will they do? kidnapping? Ransom? Killing? Rape?

Statistics show 9% students of good schools like DPS, Kendriya Vidyalya or Missionary Schools settle abroad for quality life. 26% gets quality life in metro cities of India and so they get settle there... 40% gets their life dwelling in tier two or three cities.... With such a brain drain... Imagine what will be the future of India?

Shouting slogans against corruption, Mourning on Shaheed Diwas, Fasting at Jantar Mantar, Putting Gandhi Top on head depicting I am Anna will not do...

Friends! Whatever way you get to understand my point! as a businessman you can call it a money making opportunity, as a socialists you can call it a public welfare, as a politician you can call it a leadership initiatives but be whatever.... we have a lot of work to do hear in India... We just have to get united and bring worlds best education in India for free!! Everything else follow to make India the country of Dream! Jay Hind!

Stock Market India said…
Hi there, I just wanted to say thanksIndia share market for this informative post, can you please allow me to post it on my blog?
March 26, 2012 at 4:17 PM