- September 18, 2012
In capitalizing global economy no one will do charity business, naturally they have profits in mind but if we are opening our doors they are opening theirs too. Stop complaining, grow up! Take the challenge and win!
: Jitendra Verma

In Rajeev Gandhi era when Computers arrived to India, opposition parties claimed 'In a country of Lalten and Bullock-cart where even electricity is a far cry, what computers will do?' They further extended their protests by provoking poor civilians that 'A computer can do 1000 clerks job which means one computer will cost the job of thousand Indians'

Today computer is the source of livelihood to the population which otherwise could have fighting for Brown Sugar, Cocaine, Opium.

1991 reforms of government had a criticism of bringing economic slavery but we are the witness that the per-capita income of India has grown from INR8109.00 to INR53300.00 per Annum since 1990s to 2012. In 2012 for the first time India witnessed a history of having middle class population more than poor population by 347Mn and 346Mn respectively. This indicates that the futility of dogma of "rich getting richer and poor getting poorer" 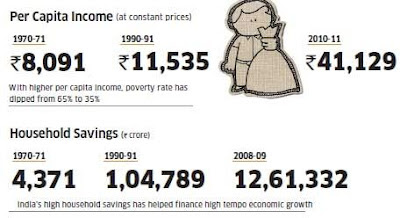 "Slow agricultural growth is a concern for policymakers as some two-thirds of India’s people depend on rural employment for a living. Current agricultural practices are neither economically nor environmentally sustainable and India's yields for many agricultural commodities are low. Poorly maintained irrigation systems and almost universal lack of good extension services are among the factors responsible. Farmers' access to markets is hampered by poor roads, rudimentary market infrastructure, and excessive regulation" - World Bank

However, I want to pin down Indian policy makers for one thing i.e. not taking actions well withing safe time zone. We react emergencies way better than provided time space, had it been a NOT alarming decision, India would have surpassed Chinese developing rate. In 1991 reforms, in Kargil war and now in FDI, actually reacting to the problems not finding ways of growth. This is one thing Indian poly makers should regret upon.

We have started feeling the heat of discomfort by these subsidies in Indian economy but we are almost burning in the fire of reservation. It only because of one reason i.e. attitude of playing safe. We are not in mood to educate of brothers and sisters that protectionism is not solution. Synergistic spirit is the real benefit. We educate our kids for risk taking by asking them walk on their feet, go school by their own, live away from home by their own than why we are not educating out people that let the market decide on what we have to pay for fuel we are consuming and what profession should we get based upon how much we are prepared.

It's a crime to teach crutch-walk to those who actually can run but are afraid to risk their safety net. With reservation and subsidy we are actually providing crutches to those who are able and with legs. This is ballooning the environment! Because of subsidized fuel their are many Indians over consuming it and so are putting pressure in demand-supply mechanism of Fuel Industry.
Their are many who are having caste based reservations but are actually the sons and daughters of IS, IAS, Doctors or such white color officials. Their are many who are the actual needy of reservation and subsidies but are not able to have it because of the exploitation of the same by their own brothers and sister. This in turn is increasing rage and anger of common Indian which some day will explode only to settle on pile of the ashes of existing canny system of administration.

For the question of repercussions of unbuttoning Economy and Politics of India from Subsidy and Reservation. I must say, to construct new houses, we have to destruct the older ones. Anything rampaged looks horrible but the feel of being robbed refuels to get rich. Things will rocket up for a very small time period and than will settle only to garner peace and prosperity. Their is term called price elasticity in economics which decides the market value of any commodity. Fuel must have its market value based upon this price elasticity! Nothing will go wrong, it will reduce pollution, black marketing and other social evils.

Civilians have always been restrained to changes but every change had only elevated their standard of living. These reforms will bring new changes to India, we just have to be hopeful. On the contrary we have to accept it that in globalized sentiments of commerce no one will bring cake in your plate without getting some profit in return. We should not accept charity from Americans and Europeans provided they are the leaders of 21st century.

changes are necessary for better leaving and they happened always by some risk..
September 20, 2012 at 9:29 PM

changes are necessary for better leaving and they happened always by some risk..
September 20, 2012 at 9:30 PM