The Industry of War

- April 14, 2014
The Industry of War
Indian partisan brought conflicts of Kashmir Issue, Eastern Pakistan, McMohan Line, and Special States along with it... These conflicts necessitated the accumulation of arms and display of it.

By Jitendra Rajaram
Conflicts are profitable. It just kills benign people, poor soldiers and turns million’s life miserable but it brings sacks of money in the banks of politicians, businessman and militia. States, no matter how democratic, wants to carry on one or more arms based conflicts in their territories. It yields in multiple ways in the favor of statesmen. By crying loud about these conflicts they provoke national sentiments which enflames citizen’s desire for solution. These cries create the perception of heroes for the statesman. The tribes/people of conflicting warzones fighting for their rights becomes terrorists in the eyes of common man. This perception develops a national sentiment which validates defense expenditure. I.e. for every billion dollar spent on buying military hardware politicians earn respect from their citizen. Displays of such arms in republic days sensationalize the audience by a sense of pride and security.
When India was conceived in 1935AD in the womb of British Colonial rule it was all set to born along with conflicts. Indian partisan brought conflicts of Kashmir Issue, Eastern Pakistan, McMohan Line, and Special States along with it. These conflicts necessitated the accumulation of arms and display of it. It was the hole in the idea of ideal democracy for the new born nation.
The nature of struggle that Indians underwent for the freedom from British Rule has a lot to explain the character of the present war emergencies of this country. In one hand main stream struggle lead by Congress kept hampering the patriotic aggression on the other hand Indian Caste Struggle Lead by Ambedkar, Minority Struggle lead by Muslim League, Tamilian Land disputes kept the sparks alive. Half way successes of Bhagat, Bose and Azad further bottled the fire of Indian citizen. It all resulted in 1948 war against Pakistan. Winning first war after Independence justified the accumulation of weapons and first defeat in 1962 by China declared it necessary.
Jay Prakash Narayan once said “Revolution is not only a destructive process; it is at the same time a great constructive force”1. This part of his definition of revolution has constantly been forgotten by the Indian Policy Makers. While we all loved Nehru and admired his world vision for India, we failed him in creating a coherent national identity of this nation. We did not ever pick the real democracy envisioned by our great Prime Minister.
Democracy has a meaning well beyond political freedom of election and ballots2. It is rather more powerful in the new discipline of ‘social choice theory’ or ‘public choice theory’ which is influenced by the economical and political reasoning and ideas.
Being the second largest nation in terms of Population and having strategic conditions in Asian land entire world conspired against us to plot our role in predicted World War Three. Soviet and USA being the two poles of the war South Asian land (India, Pakistan, China) was on process to be the battle field. These national, international and communal forces rolled the ball of weapon market in Asia. By the end of the last decade of twentieth century, India had become the world’s largest Arms Importer. 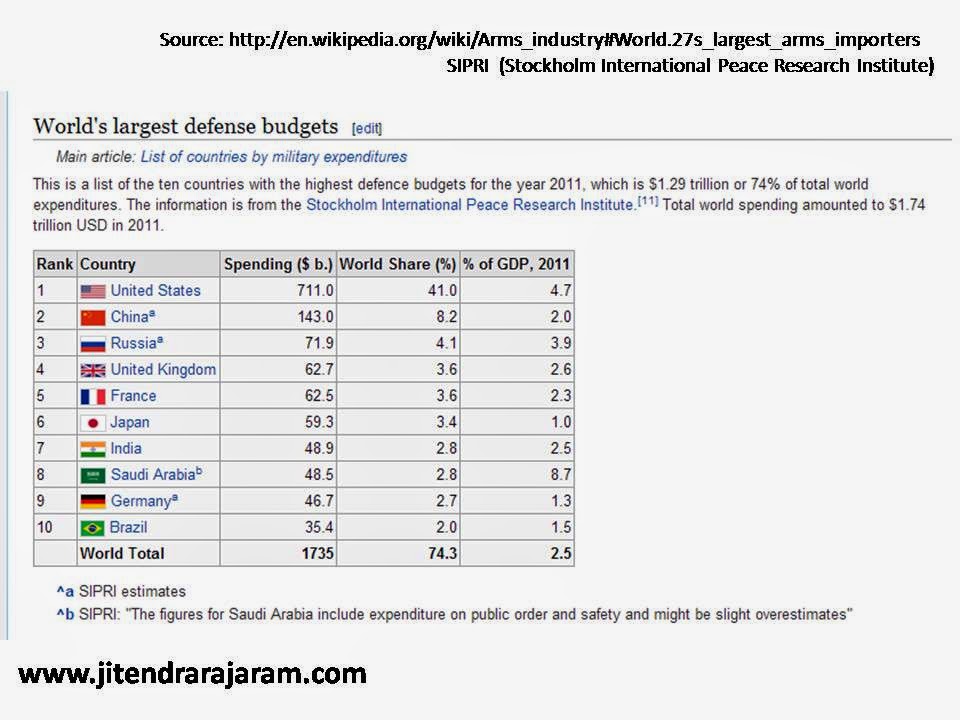 In 2013 the global market of arms has opened fully fledged super market of Military Hardware in India. You name the company and they have all got their front offices in India and they’re all employing locals3. Sunil Chaudhrie is India’s most influential arms agent who received best Asian Businessman award in London 2013.
As per the SIPRI (Stockholm International Peace Research Institute) report about tracking global arms trade, India buys 12% of all the weapons and military hardware sold in Global Market3. 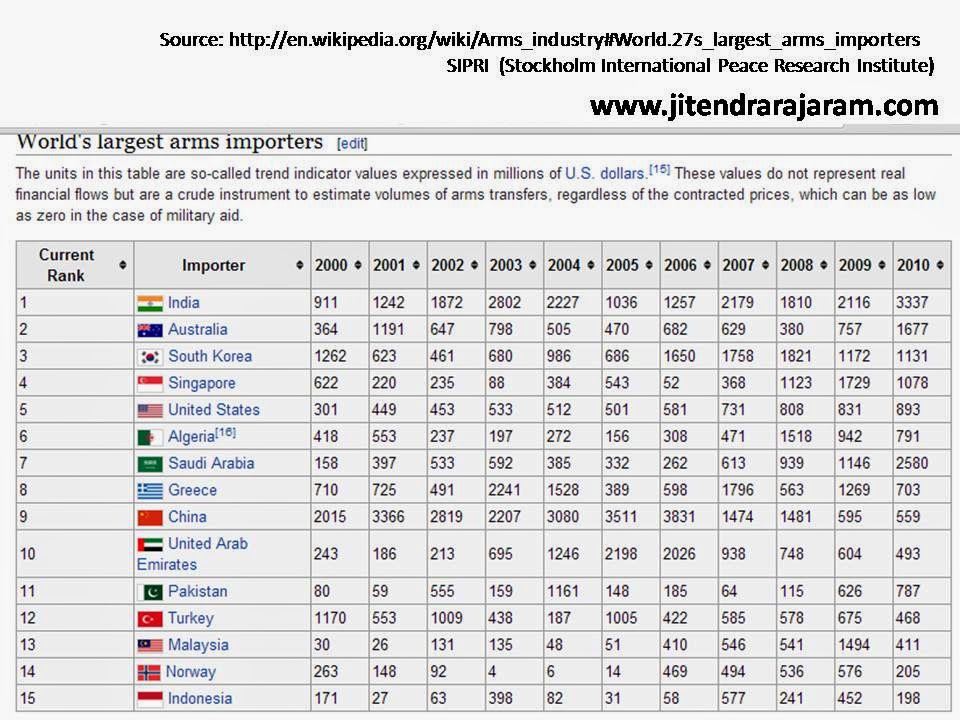 Interestingly, a nation having largest mal-nourished children, high mother morbidity, pathetic doctor-patient ratio gets funds from World Bank, Asian Development Banks and Various other International Baking Agencies for Polio, Aids, Education and Shelter without asking a single question on why this nation spends so much in arms? Explanation is quite simple, the private players of this nations has stocked so much of money by assaulting Indian Natural Resources that international agencies rating the economies for additional nation debts confidently grant approvals. Here are few explanations of the assault of Indian public properties by Indian Private Players.
According to the Lokayukta Report of Karnataka 2011, for every Tonne of Iron Ore mined by a private company the government gets a royalty of INR27.00 and the mining company makes INR5000.00. In the Bauxite sector the figures are even worse.4 The margin is enough to buy elections, governments, judges, newspapers, TV channels, NGOs.
After several strikes, agitations and sacrifices for every bundle of 50 Tendu Leaf (Bidi leaf) Adivasis are paied 10 Paise. One bag (Manak Bora) which contains around 1000 bundles is sold to the PROFIT of INR1100.00. An average trader sells 5000 bags to book profit to the tune of Rs.5.5 Million per season. This is the rough estimation the real figure goes several times more than this.5
Salwa Judum (now called Koya Commondos), Central Reserve Police Focre (CRPF), Border Security Force (BSF), The Indo-Tibetan Border Force (ITPB), the Central Industrial Security Force (CISF), Grayhounds, Scorpions, Cobra are integrated in Baster under the Policy called WHAM (Winning Hearts & Minds). Mahendra Karma was the key creator of the plot.5 In 2005 when Indian Government signed MOU with Essar Steels, Tata and Vedanta on the same day Indian Prime Minister declared Indian Maoists as the highest threat to National Internal Security. These private corporate, giants, honchos or whatever brave name you put, have agreed upon sponsoring the cost of war to the government against there so called terrorists i.e. Maoists or Naxalite or whatever name you give to poor Indian Adivasis. They know the mathematics of profit the entire Dandakaryana (West Bangal, Odisha, Chhattisgarh, Maharashtra & Andhra Pradesh) is mineral rich with billions of tones of Bauxite, Iron and Aluminum. They sell metal, alloys to manufacture Arms, governments buy arms. The cycle of buying and double buying, re-buying keeps churning billions of money for the capitalists, imperialists and militia.. 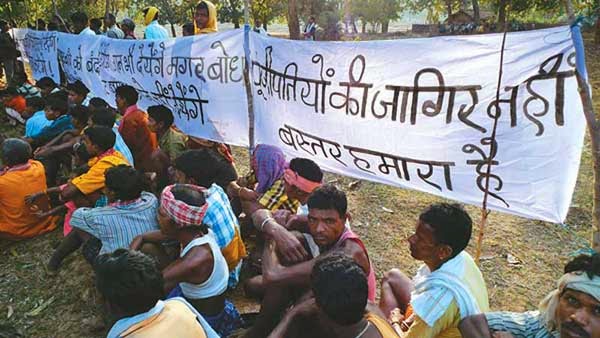 Unknown said…
Whenever i try to understand international capitalism they surprise me everytime..people of country should understand this!
April 14, 2014 at 3:13 PM