"It was easy in ancient time for religions to progress for two reasons. One every civilization was miles apart from every other civilization" - Jitendra Rajaram 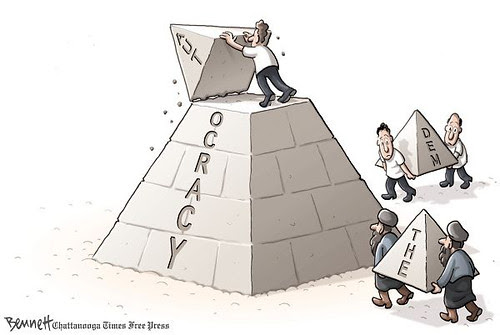 "The mixture of fear and weakness among the people who surrenders to feudalism has enlarged the idea of God-ism. The theory first coined by the power hungry ruling class and their serfs. People, when united, are the ultimate power. The select few (ruling class) always wanted to control this power of people. The control of power is all about channelizing the energy it holds. This is how the need of an imaginary superpower evolved. A superpower which can channelize the energy of united people. Ruling class invented this imaginary power to tame the real power (i.e. people).

Had I ONLY been introduced to anyone of Brahma or Allah or Moses or Christ during my childhood I would have easily believed upon god. The creators of God (i.e. Ruling Class) have devised so circumventing methods to establish godly existence that anyone can be fooled easily. Like everyone else, I grew up listening why one is better than other or why one's followers are fool and others are great... I have seen hatred by the people of one faith for the people of another. This hatred is one single and sufficient reason which justifies that theology is all about theocracy.

By one theorem that "If anyone hates everyone else is criminal" I nail every religion guilty of massacre and rioting. Anything that sheds the blood of innocent people cannot be divine certainly not this deed should be justified by any means. The entire reasoning and the reasoning's of reasoning about the existence of god is corrupt. Because in order to prove that they know 'God' they have to prove that they know everything. This is where they're exposed; the quest of sounding supreme has exposed the white lies. Since the very objective of the creation of an imagery supreme ruler is to become the second super power after Him. To become the supreme power among the mortals left them with no choice but to explain everything that happens on the earth and beyond. Not even science knows everything but because science accepts its ignorance and never claims to be omnipresent; people have no emotional attachment with it as much they have it with religions.

It was easy in ancient time for religions to progress for two reasons. One every civilization was miles apart from every other. These civilizations used to live in one climatic zone where predictability of monsoon, seasons, eclipses were high. This is why these religions have geographical orientation in their commandments. Second reason is, common man had no inter-civilization traveling or communications. Only the serfs, merchants and royal families used to travel among the establishments across civilizations that too not frequently. As I said these serfs, merchants and royal families comprises ruling class, they together weaved the matrix of religion. They steadily learned from each other. They had never followed the commandments themselves what they preached others to follow. For example, wine is banned in Islam but every Islamic ruler had regularly consumed wine. Their poems, literature and music has endorsed winery remarkably. Christianity endorsed forgiveness but the churches, priests and christian dynasty were among the most cruel rulers in terms of punishments and violent Olympiads. Hindus have preached a lot about celibacy, they have volumes after volumes of literature to proof why celibacy is best practice or devises power for men but only they have an entire massive temple on Kaamsutra (Study of Sexual Pleasures). The Hindu Kings used to have few of the largest Harems (Royal Brothels) in the world.

We've enough evidences to prove that religion is a tool to keep slaves blindfolded and have them enjoy slavery, lest you throwaway your emotional ignorance to see the truth laid naked in every corner and nooks of the corridors of power.

I wish I had more time to read what you're writing these days because when I do I find you are such a thoughtful man, hungry to advance a code of conduct that has concern for the well being of all. If I did we could exchange ideas and challenge some, not all, of our mutual presuppositions...which as you know, by their very nature as a presupposition are meant to be challenged. First in our own heads and hearts and then by others, once we're able to state them, as your blogging now affords you.

It's interesting to me in this blog that you question the matter of various faith expressions throughout history, having stated succinctly, and I might say, rather accurately, the basic tenets, but without acknowledging that ALL belief systems, be they religious or scientific presuppose faith in something larger than ourselves, a "theos" if you will. Whether it's the "theos" of science, or some other religious system.

By my way of thinking, and those of the writings of many who are much smarter than I, it is impossible to escape having faith in something, or someone...for example, to use a rather simple illustration, you and I have faith that the molecular truth we see before us in the shape of a chair will support our weight when we sit down. After all its an easily defined object and common to most of humanity...but most of humanity may not understand like you and I do that it's held together by a progression of understanding:
1. Rational Observation based on experience...which lead to
2. Hypothetical theorems,(hmm, there's that root word "theo" again) which then are
3. Proven by microscopic revelation the molecular structure upon which we sit.
Let's call it a "truth chair", tested time and again, proving over and over that our faith in the observed truth is reliable.

Now, let's take the witness stand and sit in/on our "truth-chair"...observing from that vantage point that a functioning democracy reveals, like the chair, some observable and proven boundaries, (theorems if you will). Namely the boundary of self-governance, which presupposes a defining moral code. Without boundaries we have anarchy, not a legitimate care-for-the-least-in-our-midst-democracy. If that's true, then from where, (or perhaps better asked, from who), does the free-will-operative-moral code of right and wrong conduct arise?