- June 23, 2017
"Since the Kal Yuga is taking its lessons from Sat Yuga to interpreted everything in binary, this book must be read to know how the centre of these binaries can be reached" 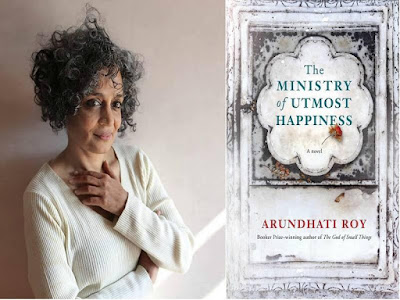 "Miss Udaya Jabeen, daughter of six fathers and five mothers is the only physical instrument of hope, the only fruitage churned out of the ministry of happiness (…utmost happiness). She is the reminiscence of brutality, sowed while her mother was being raped by her six fathers. Her name, her life, her learning and her views towards the Duniya will be shaped by five women loved her as mothers. Two of those mothers were died, two of those mothers never wanted to live and one of those mothers were neither a woman nor a man. Mothers from Kashmir, Kerala, Delhi, Baster and Indore. Jannat Guest House, an empire away from the Duniya was built over a graveyard near the tomb of Hazarat Sarmad Shah somewhere in Shahjahanabad in a thousand-year-old city called Delhi. A Hazarat who was executed by Aurangzeb because he said la illaha (There is no god).
This book is a product on sale in the supermarket of grief. Like Duniya sells death insurance in the label of “life insurance”, this book sells a basket of tragedies and grief in the name of happiness (utmost happiness).
Out of many characters, I loved Anjum the most. Ideally as a die-hard fan of Arundhaty Roy, I must have liked Tilottama but this is how intuition defies logic in real life. Anjum helped me learn that even transgenders must be hated, loved, liked or disliked based upon the same parameters applied to hate, love, like or dislike other two dominating genders. In this story, a fiction, Anjum portrayed as a natural character, her gender did not alienate me from her. This was the first break through in my struggle to love this book.
The second reason that I loved this book most is an invention of art of storytelling. A fiction story in orb of non-fiction. The art to keep claiming the story as fiction by drawing everything of the story from the real life. I loved the description of Gujarat ka Lalla, Long Pause taking Poet Prime Minster, Blue Turban Robot, Baby Voice Gandhian, An Agarwal soul trapped in activist body. It has helped me strengthen my view-point about these demigods busy in clash of titans.
The third reason is the stories of Amrik Singh, Loveleen Singh, DySP Pinky and Kashmiri Pundits. An explanation of how the beloved people of Duniya prisoned in the cages tagged as right-wing are being used in the furnace of greed. How Kashmir has become the barbeque of the world politics. A barbeque where delicious militants are being cooked to serve baked, hot and spicy.
Considering everything that is happening around the world, the hope for happiness is hardest thing to keep. Author has imagined a place where happiness can be found. An imaginary place in the junction of two things. Since the Kal Yuga is taking its lessons from Sat Yuga to interpreted everything in binary. A Duniya where every human alive is either an Indian or a Pakistani, either a Hindu or a Muslim, either a Nationalist or a Traitor, either a good or an evil… Arundhati thought why not explore happiness exactly in the middle of these binaries. Like Narsimha Avatar of Lord Vishnu in Sat Yuga had augmented a perfect half of the binary to kill immortal sake Hirannakashyap. Vishnu’s centre of binary was for the kill, Arundhati’s centre of binary is to seek happiness.
The author of this book has raised questions. Important questions which will not be answered today, no one heed on them even to attempt any answers. Today, author is all prepared to be cursed, abused and littered by the parakeet’s army.
For today, the troll’s government will keep everyone in gunpoint if they dare even imagining these questions… But what is satisfying is that that time is coming soon when these questions will be raised by the people in unison.
Most of all, this book I liked most because it has answered a very mysterious question. A mind-boggling question that I had since I was able to recognise this world. This book helped me know “Where does all old birds go to die?” If vultures are all dead? Where had they all gone died?

Abhijeet said…
Yes the author of the book raised many mysterious question and answered with her own fiction. She is a wonderful wordsmith and had authored valuable write ups..... Good review......
June 23, 2017 at 5:12 PM